Every time I see this e-card, I have to laugh. Most of our students would smile too, since we always call out “for all intensive purposes” as a classic word usage error. The grammarians at the College Board and ACT, Inc. have been known to torment kids with, among other things, eggcorns and malapropisms:

An eggcorn is an idiosyncratic substitution of a word or phrase for a word or words that sound similar or identical in the speaker’s dialect. The new phrase introduces a meaning that is different from the original, but plausible in the same context, e.g. take it for granite instead of take it for granted. We create eggcorns all the time when we try to decode the lyrics to our favorite songs.

A malapropism, on the other time, occurs when the substitution creates a nonsensical phrase. Classical malapropisms generally derive their comic effect from the fault of the user. For example, the eponymous Mrs. Malaprop from Richard Brinsley Sheridan’s 1775 play, The Rivals, uttered such memorable lines as, “…promise to forget this fellow – to illiterate (rather than obliterate) him, I say, quite from your memory.” In more recent memory, the former President George W. Bush delivered so many classic malapropisms that they came to be called Bushisms, e.g. “And there is distrust in Washington… I’m sorry it’s the case, and I’ll work hard to try to elevate (rather than alleviate) it.”

In general, a good way to avoid eggcorns and malapropisms is to only use words and phrases that you know well. But to ensure you’re ready to handle the worst the tests can throw at you, expand your vocabulary by reading widely and deeply. Only then will you be prepared to reprehend the true pronunciation of these supposebly tricky phrases! 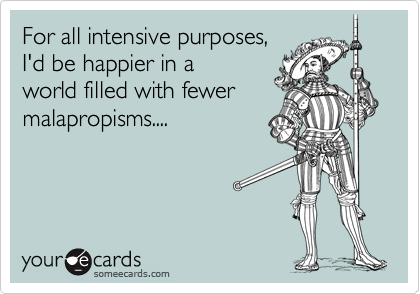 Previous articleLearning and SufferingNext article Anatomy of a Test Question