The SAT has always stood out as the classic standardized test, in which a population of test takers would earn raw scores that would then be scaled according to the standard distribution in a classic bell curve. This aspect of the SAT is not changing. In fact, the new test brings everyone back to that familiar 1600 scale: 200-800 for Evidence-Based Reading and Writing plus 200-800 for Mathematics. Students will also receive 2-8, as opposed to the current 2-12, for each of three traits for Essay, the results of which will be reported separately.

The big change is the shift away from the wrong answer penalty, often erroneously dubbed the guessing penalty. The College Board is taking another page from the ACT handbook in implementing “rights-only scoring,” in which testers earn a point for each correct answer but lose nothing for incorrect answers. This is a radical departure for an organization that was philosophically opposed to allowing test takers to improve their scores through random guessing. However, teens almost unanimously prefer the rights-only scoring structure and have been flocking to the ACT in large part to escape the wrong-answer penalty.

The third substantial change to SAT scoring is the addition of a variety of seven subscores and two cross-test scores. The cross-test scores, which may yet be altered or removed entirely, are interesting in concept. Scores in Analysis in History/Social Studies and Analysis in Science will be based on selected questions across Reading, Writing and Language, and Math. Considering how few schools pay attention to ACT subscores, however, these alterations may prove of little practical consequence. 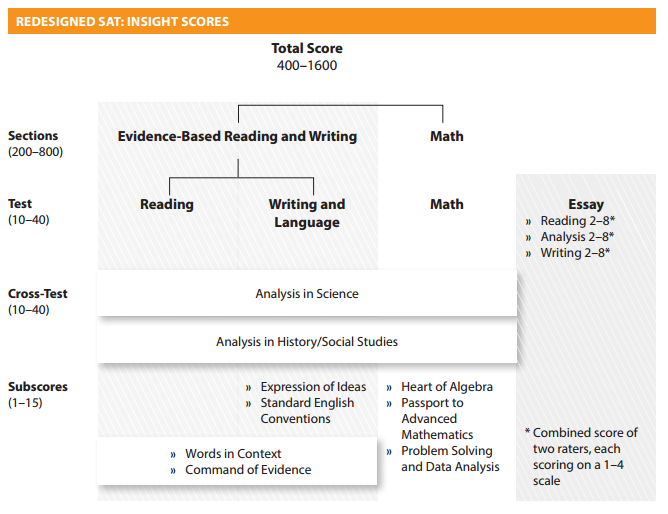 (From Test Specifications for the Redesigned SAT)

WHAT’S THE SAME?
Students still receive a raw score of 1 point per correct multiple-choice answer. The raw score is still converted to a scaled score.

WHAT’S NEW?
Back-to-basics 1600 scoring and the elimination of the wrong-answer penalty make this test more appealing to students and parents alike. Subscores and cross-test scores may prove equally enticing to both admissions officers and educational administrators looking for granular insights into test taker abilities.

WHAT’S THE DIFFERENCE?
The move away from the traditional wrong-answer penalty may be one of the biggest improvements to the SAT, at least from a student perspective. The retro scoring paradigm, on the other hand, is a likely response to all those colleges that continued to evaluate students on a 1600 scale by ignoring the SAT Writing section. Schools will be hard pressed to ignore Writing now that it is folded into the 200-800 Evidence-Based Reading and Writing score.