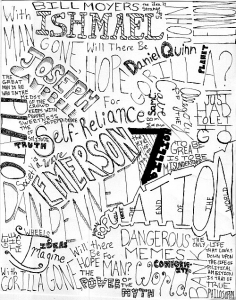 Is there anyone who can’t relate to that sublime moment of artistic reverie triggered by a particularly boring lecture? I did a lot of my best artwork during high school and college in the margins of notebooks. But just as universal as doodling during instruction might be, so is the experience of having a teacher shut the artistic process down.

Classroom doodling has been perceived as both disrespectful to speakers and deleterious to listeners. But is doodling in class really so bad? Some research suggests otherwise.

A small study conducted at the University of Plymouth, UK asked participants to monitor a monotonous phone message regarding the names of people coming to a party. The subjects were split into doodlers and non-doodlers. Surprisingly, the doodling group recalled 29% more information about the message on a surprise memory test.

Multitasking generally impedes learning, productivity, and performance. However, exceptions can be made in instances where tasks require so little in the way of cognitive resources that actors lapse into distraction and daydreaming. In other words, these tasks are too boring. Doodling appears to provide sufficient additional stimulus to stave off daydreaming, thus increasing attention.

In some ways, doodling may contribute more to learning than simply focus. Sunni Brown, in writing the Doodle Revolution Manifesto, coined the term infodoodle, meaning to generate text-, shape- and picture-based language to clarify and communicate concepts or to craft and display complex information using a union of words, shapes and pictures. You’ve done this before, right?

The role of doodling in facilitating learning definitely deserves more attention, but for now, teachers should show more patience with amateur artists in the classroom. Doodling, among many other benefits, seems to sharpen, rather than dull, concentration and recall.

But, it should go without saying, taking a standardized test is no time to doodle!