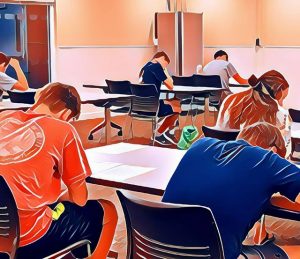 If I’ve said this once, I’ve said it a thousand times: if you’re not taking tests, you’re not really doing test prep. This is not to say that effective test preparation doesn’t incorporate an extensive array of educational strategies and interventions beyond testing. The best test prep programs don’t ignore individualized instruction, systematic content review, or targeted coaching and feedback; they simply make sure they leverage the power of practice testing to full effect.

How exactly can a learner best leverage the full value of practice testing? Start with a perfect representation of an official test, ideally published by the actual test maker. Next, seek out an opportunity to take this test under simulated testing conditions, optimally with a trained proctor. Lastly, take the test as seriously as possible to derive maximum experiential value. Yet, even this simple recipe for success may be improved upon with a few more choice ingredients.

Hundreds of studies have been conducted over the last century to explore every dimension of testing, particularly its well-documented benefits. One group of scientists collaborated to review and summarize findings from research into testing and a variety of other learning methods. Their monograph Improving Students’ Learning With Effective Learning Techniques: Promising Directions From Cognitive and Educational Psychology lists ten learning techniques in detail and offers recommendations about their relative utility. What did they find? Only two techniques–practice testing and distributed practice (learning over time)–received high utility assessments “because they benefit learners of different ages and abilities and have been shown to boost students’ performance across many criterion tasks and even in educational contexts.”

The phenomenon of improved performance from taking a test is known as the testing effect, which can be amplified by how testing is structured. Apart from obvious considerations like format, the scientists brought attention to number, frequency, and feedback of practice testing.

FREQUENCY OF TESTS: “…the benefit of repeated practice testing in turn depends on the timing of the practice tests. Several studies have increased the number of tests presented in immediate succession within a session and have found minimal or nonexistent effects, in contrast to the sizable benefits observed when repeated tests are space.”

In summary–because the monograph itself is exhaustive, to say the least–educational research supports a testing regimen that incorporates multiple practice tests over a span of weeks or months rather than days. Testing should always be followed within a reasonable period by test review. Better takes practice, but you won’t get better if you don’t do it right!