One of the many choices college-bound students must grapple with–apart from, say, which schools to apply to–is whether to focus on the SAT or ACT. The two tests overlap significantly in terms of content and structure, but their design philosophies reward different types of test takers. All colleges accept both tests equally, so students can lead with whichever one best showcases their particular strengths. However, the two dramatically different scoring schemes of the SAT and ACT have made determining how scores compare challenging to say the least.

In the past, College Board and ACT have collaborated on concordance tables intended to establish the relationship between scores on these two assessments that measure similar but not identical constructs. After the big changes to the SAT in 2015, College Board released an SAT/ACT concordance table without any input from ACT, prompting the Iowa City test maker to blast the effort. At last, the frenemies have come together once more to proudly release 2018 ACT/SAT Concordance Tables.

According to College Board, the concordance tables show ACT and SAT scores with the same percentile rank for a group of students who took both tests, based on 589,753 students who were graduating seniors in 2017 and who took both the ACT and the new SAT tests between February 2016 (for the ACT) or March 2016 (for the SAT) and June 2017. Interestingly, the new concordance tables reveal some aspects of the SAT and ACT scales we might have missed, especially when we include percentile ranks alongside the scores in our own Ultimate ACT/SAT Concordance Table: 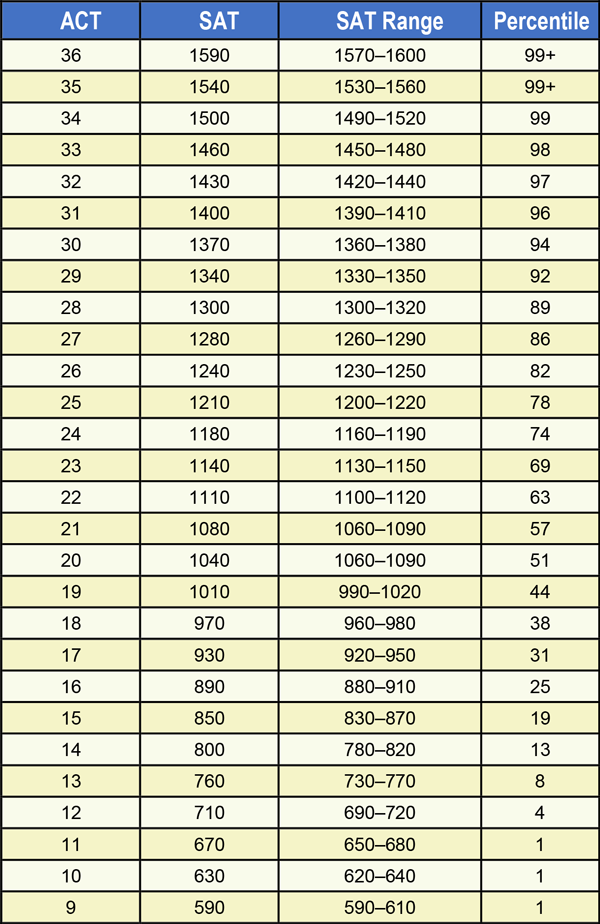 Our Ultimate ACT/SAT Concordance Table allows easy comparison of ACT scores to both specific SAT scores and broader score ranges with the added context of percentiles. Percentiles for these tests establish how many of a given year’s cohort of graduating college-bound seniors scored at or below your specific score. The test makers provide percentile ranks for section and composite scores. The 2018 ACT/SAT Concordance Tables integrate with the most recent publications of SAT percentile data and ACT percentile data, all of which we use in our table. Obviously, we use SAT User Percentiles rather than the useless Nationally Representative Sample Percentiles. Each data set provides more granular information, especially on the concordance between test sections.

—ACT percentiles, on the other hand, have quietly shifted in significant ways: the bell curve beneath which most student scores fall has become narrower and, presumably, steeper. While the test maker still claims a median ACT score of 21, the new 51st percentile score is actually 20. The scores at the upper range appear to be dropping in comparison to their ranks in previous years. Most notably, an ACT score of 33 has, as long as I can recall, been a solid 99th percentile. This year, a 33 is only 98th percentile.

Considering how influential these concordance tables are with college admissions staff, we’ll see how the percentile shifts impact entry to the most highly competitive schools. for the time being, you can use this wealth of data to determine which of your scores look best for admissions purposes.