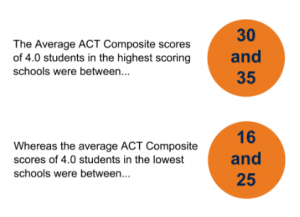 Earning top grades is never easy, and those who earn all As or 100s or 4.0s deserve tremendous praise for exhibiting the effort, commitment, and execution that academic excellence demands. But sometimes class ranking obscures relative ability on a larger scale. Simply put, not all As are created equal. ACT, Inc. recently confirmed what we’ve all suspected: even some students with a high school GPA of 4.0 are not college ready.

How can this be? Surely a student who as earned a place in the upper echelon of students in an academic setting has proven that he has what it takes to succeed at the next level. To this, an unhappy horde of prospective professional athletes, actors, and performers sigh, “Of course not.” The best pitcher in Double-A baseball may not have what it takes against Triple-A competition. By the same token, high grades in a non-rigorous academic environment don’t necessarily signal the skills needed to thrive at a more competitive school.

Anyone familiar with the arbitrary ACT scale of 1-36 recognizes how far apart these two student groups are, despite their shared excellence at earning superior grades at school. The ACT range for the top quartile students averages to a neat 99th percentile, with the lowest achievers still handily beating 90th percentile. The range for the lowest quartile, on the other hand, averages to 20.5, which is just about the 50th percentile for the ACT. The difference between relative rankings of test scores and GPA may be disappointing for some, but not nearly as troubling as the relationship between test scores and college readiness benchmarks.

ACT College Readiness Benchmarks represent the minimum scores in each section of the ACT associated with a 50% chance of earning a B or better and approximately a 75% chance of earning a C or better in the corresponding college course or courses. While we would expect students who excel in high school to at least pass in college, these benchmarks tell a different story. ACT Readiness Benchmarks range from an 18 in English to a 23 in Science, which suggests that many of the lowest quartile 4.0 students actually score below the benchmarks for some or all sections of the ACT.

Academic excellence in any setting deserves high praise. Furthermore, the skills, substance, and spirit required to earn the highest grades a teacher offers will serve these 4.0 students well in college and beyond. But great grades can sometimes obscure deficiencies that need to be addressed in advance of the application process. All things being equal, GPA is the single most important factor in college admissions, but test scores are used to put those grades in context. What does this mean? Even a 4.0 in high school won’t mean much if your test scores signal that you might not be ready to excel at that next level.