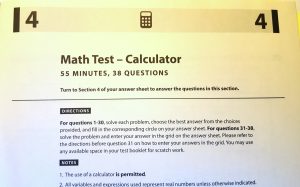 In a series investigating various aspects of the SAT, Reuters reported on issues related to excessively wordy math problems, specifically how time-consuming such questions were. Research suggested that traditionally low performing test takers were dramatically disadvantaged by the profusion of text-heavy word problems. The College Board ignored this research when redesigning the SAT Math section, but the president of the College Board recently admitted to this and various other errors. On the topic of SAT Math, David Coleman promised, “We are going to do everything we can to further simplify the mathematics section,” and further added, “Every extra word should go. Complex, distracting situations should go.”

The way math is tested on the SAT and ACT differs dramatically from how math is traditionally tested in school. Conventional math education focuses on teaching specific topics sequentially, then assessing for mechanical understanding. For example, when students learn triangle geometry, they may review formulas for perimeter and area along with concepts like the Triangle Inequality Theorem, the Pythagorean Theorem, and special right triangles. During that unit, they can expect quizzes and tests to focus almost exclusively on triangle geometry, usually in the form of clear questions that prioritize memorization and calculation.

In contrast, the SAT and ACT test math holistically, expecting students to exhibit a grasp of concepts learned over almost an entire academic career. Triangle geometry, which may represent the work of months of schooling, represents the smallest fraction of what test takers are expected to know on test day.

Yet, if the challenge was simply the breadth of topics tested, students might not experience such a mismatch between their grades in school and their scores on SAT and ACT Math. The real challenge posed by these exams is that memorization and calculation are not, in themselves, enough to win the day. SAT and ACT Math sections serve primarily as tests of problem solving ability.

Why are SAT and ACT Math problems so wordy?

Understanding what a problem really asks is a big part of these tests.

Determining the quickest, easiest, and most effective way to solve a problem is a big part of these tests.

Overcoming the confusing, intimidating, and ambiguous nature of certain problems is a big part of these tests.

Memorization and calculation are categorically NOT big parts of these tests. Case in point, the SAT includes almost all salient formulas at the beginning of each math section, while calculator use is permitted on all ACT Math questions.

Ultimately, claims that exam math problems will be streamlined and simplified should be taken with a grain of salt. As currently constructed, the SAT and ACT evaluate a distinct array of problem solving skills and conceptual mastery of high school mathematics. Colleges value these scores as both supplement and counterpoint to school math grades. Watering down the tests–specifically, simplifying their emphasis on problem solving–might have the adverse effect of watering down their value.